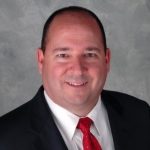 Dave Abeln started his professional career in March of 1991 at Metcut Research as a test technician. In June 1992, he earned a Bachelor’s degree in Mechanical Engineering from the University of Cincinnati. During his nearly six year career with Metcut, he was involved in the more technically challenging test programs. Dave spent two summers at our laboratory in Nantes, France. During those three month periods in 1994 and 1996, he trained our French employees with the skills needed to perform numerous mechanical type tests.

In September of 1996, Dave relocated to West Palm Beach, Florida. He worked in the Mechanics of Materials and Behavior Department for Pratt and Whitney’s Military Gas Turbine Division. Until March of 1999, Dave characterized the low cycle fatigue behavior of many advanced metallic materials with a focus on single crystalline structures.

Dave returned to the corporation in March of 1999 as a Program Manager at Cincinnati Testing Laboratories (purchased by Metcut in June of 1998). Dave has managed test programs that have concentrated on various materials including super alloys, inter-metallics, metal matrix composites, ceramics, plastics, elastomers, and advanced composites (CMC and PMC). In April of 2013, Dave was promoted to Engineering and Customer Development Manager. In that role, Dave continued to grow CTL’s Engineering team. As of April 2014, Dave is serving as CTL’s Vice President and continues to focus on engineering management functions aimed at developing forward-thinking project management skills in our growing team. Dave also provides a leadership role in the area of customer and business development.

Cincinnati Testing Laboratories (CTL) is an internationally recognized leader in the composite materials testing field. Our trusted team of engineers, technicians, and machinists supply material property data to industry and government agencies. Our commitment to provide comprehensive machining, conditioning and testing services with speed and accuracy are key to our continued success and future growth.